This keynote lecture is part of the Second Annual International Seminar in Historical Refugee Studies „Historicizing the Refugee Experience, 17th–21st Centuries“ taking place at GHI Washington July 13-16, 2022. The lecture will be streamed via Zoom for non-conference participants who are interested in joining.

The figure of the refugee has long been perceived as a man headed into solitary exile. However, if we re-examine the case of France as a land of departure and of asylum, other protagonists of forced migrations come into view, namely women and children, often treated as a single entity by the authorities. Starting in the 1830s and going through to the eve of the Second World War, this paper complicates the typical portrait of the refugee, shedding light on the place and increasing role played by women and children in exile, in France and in Europe.

Delphine Diaz is an Associate Professor in History at the Université de Reims since 2014 and a Research Fellow of the Institut universitaire de France since 2020. Prior to joining she received her Ph.D. from the Université de Paris 1 Panthéon-Sorbonne in 2012. Her first book, Un asile pour tous les peuples? Exilés et réfugiés étrangers en France au cours du premier XIXe siècle, won the Augustin Thierry Prize for history. Between 2016 and 2020, she coordinated the AsileuropeXIX research program, “Towards a European history of exile and asylum during the 19th century,” funded by the Agence nationale de la recherche. She is the author of a book on the history of the refugees in Europe, En exil. Les réfugiés en Europe de la fin du XVIIe siècle à nos jours (Gallimard, 2021).

The purpose of the Second Annual International Seminar in Historical Refugee Studies is to promote the historical study of refugees, who are too often regarded as a phenomenon of recent times. By viewing the problem of refugees from a historical perspective, the seminar seeks to complicate and contextualize our understanding of peoples who have fled political or religious conflicts, persecution, and violence. By bringing together 14 advanced PhD students and early postdocs from different parts of the world whose individual research projects examine refugees in different times and places, we intend to give a sense of purpose to this emerging field of study and demonstrate the value of viewing the plight of refugees from a historical perspective. 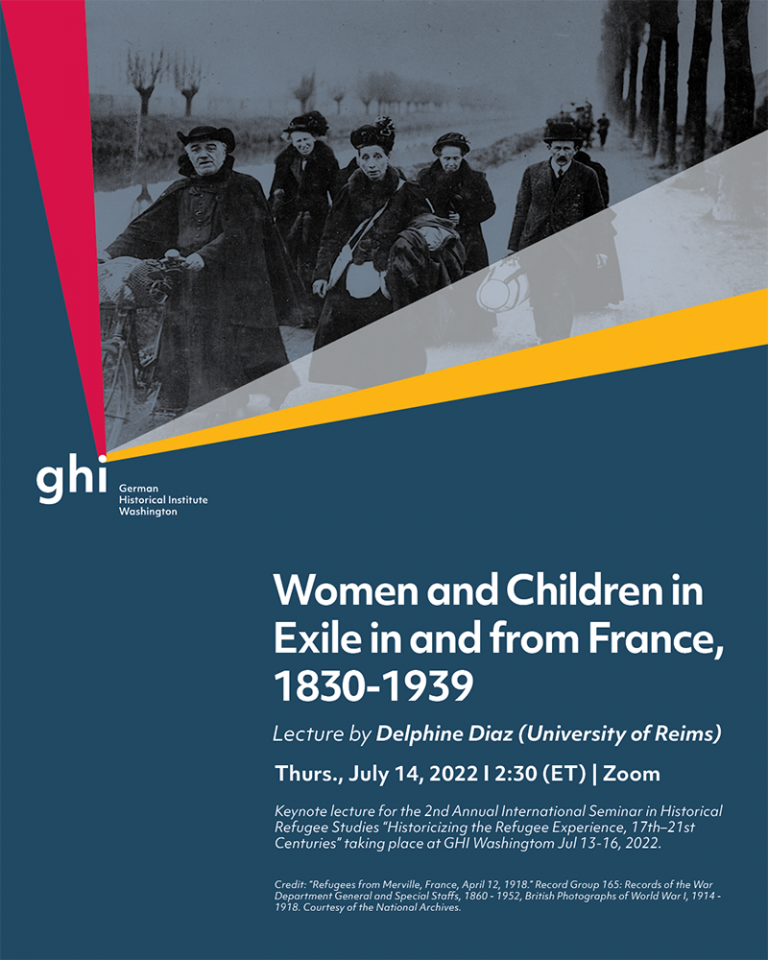 REGISTRATION
Please register for the event via this link.

ORGANISATION
The University of Duisburg-Essen (UDE), the German Historical Institute in Washington (GHI) and the National History Center of the American Historical Association (NHC), in cooperation with the Interdisciplinary Center for Integration and Migration Research (InZentIM), the Institute for the Advanced Study in the Humanities (KWI) and the Centre for Global Cooperation Research (KHK/GCR21)