Environmental journalists, novelists, filmmakers, and artists have traditionally preferred realist genres and styles to highlight the materiality and scientific grounding of environmental crises. Over the last twenty years, this convention has increasingly come into question. On one hand, climate change and other rapidly evolving ecological crises have diminished the relevance of stories and images focused primarily on individuals and families, particular places, and events commonly considered plausible. On the other hand, narrative themes and plots from speculative fiction have increasingly spread into environmental journalism and nonfiction. Concepts such as the „new normal,“ the „New Weird,“ and „hyperobjects“ have sought to capture this altered type of realism.

This lecture will explore the controversies about what kinds of realism are appropriate and effective in environmental communication today, and it will argue that the narrative strategies of science fiction, traditionally considered a secondary or minor genre merely designed for entertainment, offer the most interesting foundations for thinking and talking about global environmental change.

The literary scholar Ursula K. Heise is the 2022 Visiting Professor for Public Humanities of the Wissenschaftsforum zu Köln und Essen. A pioneer of the Environmental Humanities, she will be a guest in Cologne and Essen in October 2022, giving two lectures and a public seminar. As Visiting Professor for Public Humanities, Ursula Heise will focus on the role of the humanities in the academic and public discourse on climate change and biodiversity and ask what role the analysis of narratives, images, and knowledge systems play in the context of environmental and climate science research. This year’s Forum Professorship is organized by the Cultures of Climate research group.

Heise’s publications include Sense of Place and Sense of Planet: The Environmental Imagination of the Global (Oxford University Press, 2008), After Nature: Species Extinction and Modern Culture (Suhrkamp, 2010), and Imagining Extinction: The Cultural Meanings of Endangered Species (University of Chicago Press, 2016). 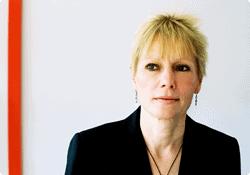 Participation & Registration
If you wish to attend, please send an e-mail to christine.cangemi@uni-due.de with the subject line „Participation in person – 24.10.2022“ by October 16.

PLEASE NOTE: Limited seats are available for attendance. Information is subject to change depending on the pandemic situation. Attendance in presence is only possible after written registration. Wearing medical or FFP2 mask is mandatory upon entry into the building.